You are here: Home / Fatigue-Free Body / Why Is Fatigue Worse In The Morning?

Is your fatigue at its worst first thing in the morning?

We’ve all been there – those days where even the thought of getting out of bed in the morning is overwhelming. But for some of you, this could be every morning. When your days start with such an intense level of fatigue, it’s hard to muster up any motivation to seize the day.

Fortunately, there’s a lot of good science that can help explain why you experience such intense fatigue levels in the morning. In this post, I’ll explore each of them in-depth. By the end, you should have the knowledge needed to improve your AM energy levels! Read on to learn about:

What exactly is morning fatigue?

Fortunately, I won’t have to dive into a lengthy, scientific explanation of what exactly constitutes morning fatigue. Fatigue in its most general sense is the difficulty or inability to initiate activity. This tends to appear in three ways:

The time of day this happens is unique to you. From my clinical experience, fatigue seems to be the most prevalent first thing in the morning or in the late afternoon.

Bottom line: Morning fatigue is a sense of weakness, an inability to take part in activities, or challenges with concentration, memory, or emotional stability that is the most apparent first thing in the morning.

1. The most obvious cause of morning fatigue: not enough sleep

Are you sleeping less than 7 hours per night? Is your sleep disrupted?

If you’re answering yes to either of the above questions, your morning fatigue could simply be caused by a lack of restful sleep. Lack of sleep has substantial negative effects on sleepiness, motor and cognitive performance and mood, as well as on some metabolic, hormonal and immunological variables. (1)

Perhaps even more alarming, sleeping less than 7 hours per night on a regular basis is associated with severe negative health outcomes, including weight gain and obesity, diabetes, hypertension, heart disease and stroke, depression, and increased risk of death. Sleeping less than 7 hours per night is also associated with an impaired immune function, increased pain levels, impaired performance, increased errors, and a greater risk of accidents. (2)

In a study done on Australian teenagers, it was found that going to bed later and sleeping until later in the day was associated with negative health outcomes like an elevated body-mass index (BMI). Additionally, those that went to bed later also spent more time in front of the television and less time doing physical activity. (3) We’re not sure if these results will also carry over for adults. Anecdotally, I can certainly vouch that when I stay up late, I almost always engage in more screen time and rarely hit the gym the next morning.

Research aside, I think it is safe to say that your body has evolved over many thousands of years to align itself with the light-dark cycle of your geography. Therefore, it is in your best interest to ensure that your 7-9 hours of sleep occur when it is dark outside. Night shift workers are at increased risk to develop fatigue, psychological and cardiovascular symptoms, and stress maladaptation/intolerance. (4, 5, 6)

How do you know you’re getting enough sleep?

This can be nearly impossible to determine subjectively. Instead, I recommend tracking your refluxes. Below, I’ve listed 4 easy steps to help you determine your optimal amount of sleep.

2. Other tips for improving morning fatigue

Some people do well eating a smaller dinner (especially those with digestive issues). Others do better with a bedtime snack, such as those who tend toward low blood sugar. In general, though, it’s best to go to bed neither overly full nor hungry. You should also make sure your diet isn’t too low carb or low fat, as these types of diets can also lead to trouble sleeping.

Cut caffeine and alcohol – these two items can have a profound effect on sleep, so they’re best left out if you’re having sleep problems. Remember that if you are currently drinking a lot of coffee, it’s best to wean yourself off rather than cutting it out cold turkey.

It’s important to get adequate amounts of physical exercise for proper sleep. Make sure to pay special attention not only to exercise, but also the time that is usually spent being sedentary. Try a standing or treadmill desk, take the stairs, and walk more!

If you struggle to fall asleep, ensure your electronic devices have the blue light blocker enabled. You download one for free here. In the hours before bed, try your best to limit your exposure to bright lights. Bright lights (and electronic devices) block melatonin secretion.

The hormone cortisol is intimately tied to your body’s circadian rhythm. High cortisol levels throughout the day help to produce a sense of wakefulness. Low cortisol levels at night assist you in falling asleep. Irregularities in your cortisol rhythm and/or levels are commonly tied to fatigue. If an abnormality in your cortisol hormone occurs in the morning, it’s likely you’re going to experience morning fatigue. I’ll explain exactly what occurs below. 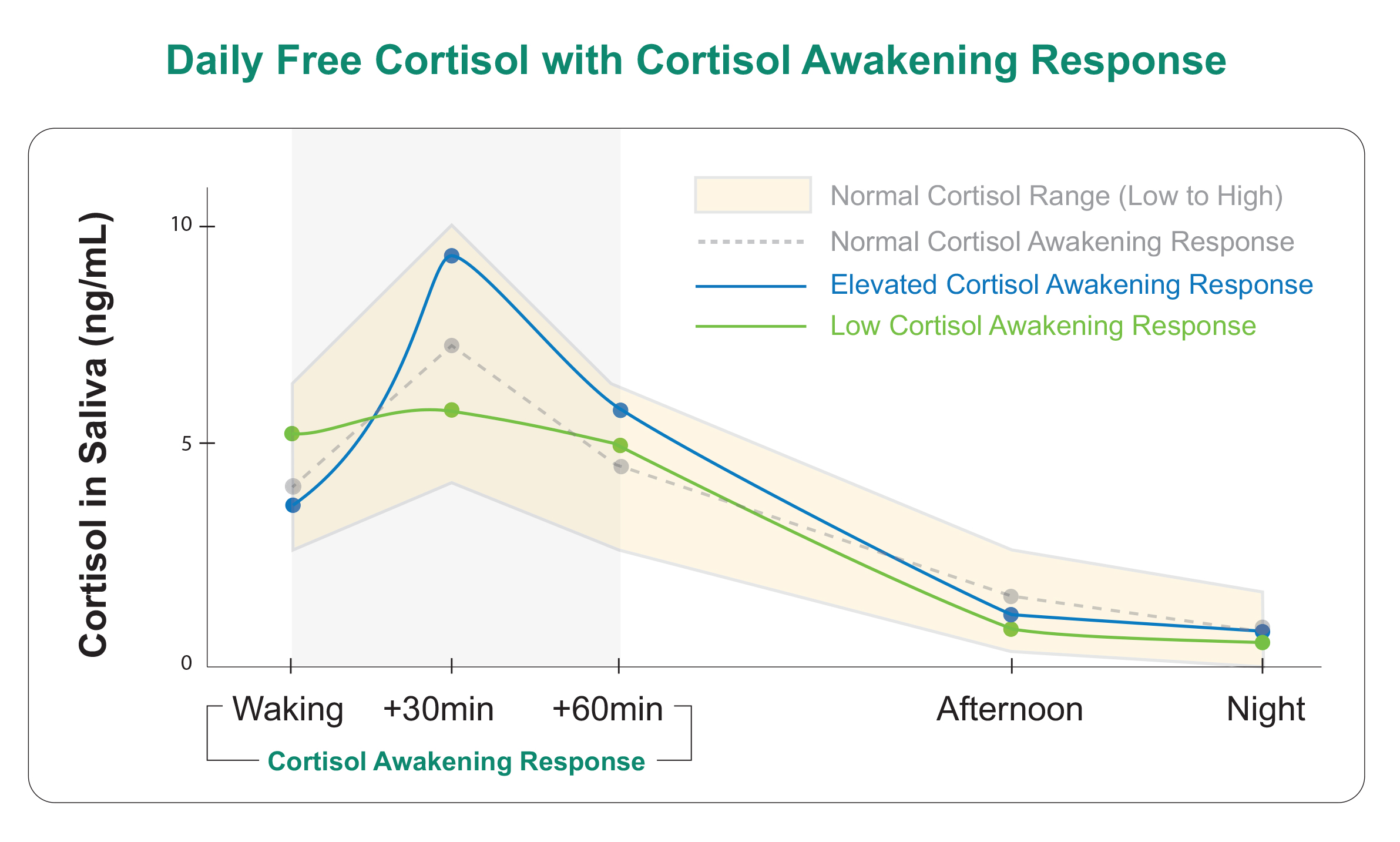 The surge of cortisol in the morning pulls sugar out of your cells and brings it into your blood. This raises your blood sugar which helps to give you the energy to complete morning tasks. Rewinding the clock to the days of your paleolithic ancestors, the cortisol awakening response could also be what kept you alive. If you awoke to danger, having sugar in your blood to use as energy to run away could have been the difference between living and dying.

If you’ve tried my recommendations to improve your morning fatigue without success, your morning cortisol levels could be to blame. An altered cortisol awakening response is generally a response to your body undergoing a stress response. Remember, stress isn’t what you think it is. The stresses that affect your cortisol levels are generally hidden stresses.

How to improve your cortisol awakening response

Cortisol is greatly affected by the light-dark cycle: Darkness suppresses cortisol production and exposure to sunlight increases it. To get a healthy surge of cortisol in the morning, make sure you expose yourself to the sun (or a full spectrum light) as soon as you wake up.

For those of you living at latitudes resulting in minimal hours of sunlight during the winter season, it becomes imperative to purchase a full spectrum light. Expose yourself to this light upon waking for 10 minutes. This will simulate exposure to the sun which should help cause a surge of cortisol. In the evening, you’ll want to do the opposite – avoid exposure to bright lights as best you can.

If you find that the light therapy is not improving your morning fatigue, low circulating levels of cortisol could be to blame. I recommend seeking out a knowledgeable Functional Medicine practitioner to help you assess and treat your cortisol levels. If a practitioner is not available in your area, you could try supplementing adaptogens like ashwagandha or rhodiola first thing in the morning.

Ok, now you know my best strategies for improving your morning fatigue!

Want to know more? Learn how to have a fatigue-free body!