You are here: Home / Eat for Energy / Do Diet Drinks Contribute to IBS?

Could “diet”, low-calorie, or weight loss drinks be contributing to your IBS?

If you’re like many Canadians, you may reach for artificial sweeteners or “diet” drinks instead of products filled with sugar. You’ve heard about the benefits of decreasing your sugar intake but don’t want to stop eating and drinking your favorite sweet snacks.

While we can all agree that decreasing your sugar intake is important, replacing it with artificial sweeteners is not the best solution.

Artificial sweeteners are found in more and more food and beverage products. Now new research suggests they may play a role in the development of gut issues, especially in those with irritable bowel syndrome (IBS).

Up to two-thirds of people with IBS find that their symptoms either begin or get worse when they eat. It only follows that finding foods that don’t trigger symptoms is a good first step to controlling IBS.

Studies have shown that following two different types of diets can help improve the symptoms of IBS. These diets are:

But what about foods containing artificial sweeteners? Could they be contributing to symptoms commonly found in IBS?

Just like in humans, the digestive tracts of mice have a collection of good and bad bacteria that must be in a perfect balance to ensure good health. Here I’ve written more about the affect bacteria has on your gut.

After mice were given aspartame, sucralose, and saccharin, researchers found they were unable to tolerate sugar. Eating the artificial sweeteners changed the good bacteria in their digestive tract.

Is the same true for people?

Researchers studied the effects of artificial sweeteners in a small-scale human study. Seven people either ate or drank food containing saccharin (Sweet ‘n Low) at the maximum amount recommended for one week. When the week was over, four of the seven people had problems digesting sugar. Researchers then took some of their gut bacteria and transplanted it into mice that did not have gut bacteria. After the transplant, none of the mice could tolerate sugar either.(1)

If you suffer from IBS or another gut issue, I recommend limiting or if possible, avoid eating and drinking food that contains artificial sweeteners.

There is currently no hard evidence proving that artificial sweeteners affect how the stool moves through the intestines, but they do affect the hormone that is necessary for bowel movements. Serotonin is best known for its role as a regulator of mood. However, it also controls other bodily functions – including bowel movements.

Sucralose has been shown to increase serotonin production. Increased serotonin speeds up the frequency of bowel movements. (3) If you already have diarrhea due to IBS this is something you definitely want to avoid!

What are artificial sweeteners?

Artificial sweeteners are chemical compounds made in laboratories. They are a substitute for sugar in processed foods and beverages.

Artificial sweeteners are often marketed as “healthy”, “beneficial”, or “natural” as they don’t contain the calories found in sugar.

Common varieties of artificial sweeteners include: (5)

In restaurants, you’ll often see these sweeteners in paper packaging for sweetening tea or coffee. In North America, the colors are typically white for sugar, blue for aspartame, pink for saccharin, yellow for sucralose (United States) or cyclamate (Canada).

Aside from diet soda, artificial sweeteners can be found in:

The difference between sugar and artificial sweeteners

What’s the difference between a regular sweetener and an artificial one?

Calories. Regular sweeteners like sugar contain calories while artificial sweeteners have zero calories or are virtually calorie-free. This is because they are made up of chemical formulations that the body cannot digest. So they make a food or drink taste sweeter and then pass right through the digestive system.

Sweeteners without calories may sound like a good idea when you’re looking to lose weight, but research suggests otherwise.

When food is broken down into calories your body regulates how much is enough. If you’re eating something sweet, your body associates the sweet taste with calories. When you’ve eaten enough to satisfy your hunger, your digestive system sends a signal to the brain that says “I’m full.”

However, if the calories don’t arrive with the sweet taste, your brain gets confused and signals that you’re still hungry. Continually eating and drinking artificial sweeteners confuses the system so that our brain no longer knows when the sweet taste signal carries calories and when it doesn’t. This leads to eating more calories. Over time, increased calorie consumption results in weight gain.

How to live without artificial sweeteners

But don’t despair – you can do it. Here are some tips to help you clean up your diet:

Like everything I recommend, small steps are perfectly fine. Every time you eliminate another item that contains an artificial sweetener your body will thank you.

We also recommend following a paleo-style diet for 30 days to find out what foods are triggering your symptoms. Check out our post on trying a 30-day paleo reset diet.

Looking for more ways to combat your IBS?

Be sure to check out all of our blog posts on IBS. 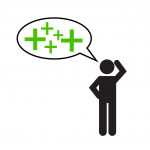